After facing a trio of setbacks, party supplier says her fate is hanging by a thread 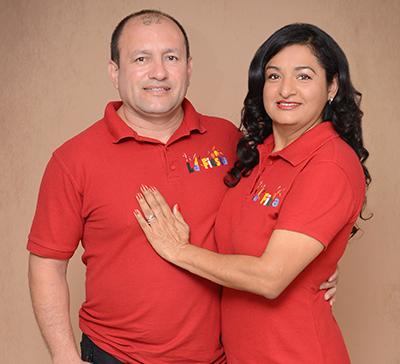 With a degree in Business Administration and a desire to achieve the American dream, Aracely Garcia moved from Guatemala to the United States in 1995. She says her life hasn't been the same since she became co-owner of La Fiesta Party Supplies & Gifts, an import and export distributor of party supplies located in Los Angeles.

But Aracely’s path to entrepreneurship encountered a rough start after arriving in the U.S. After learning that her business degree wouldn't be valid overseas, her family advised her to look for unskilled labor. Reluctant to start from scratch, she signed up to take English classes at a local school. She later pursued her General Education Development diploma, where she met her future husband and business partner Alfredo Garcia.

Aracely shares she lacked faith in herself and her business when they first started out. She explains, “Our enterprise was very small, and I doubted our success. But Alfredo encouraged me to work hard and now we've been on this path for over 15 years. Opening a small business has its obstacles but it’s not impossible for immigrants. Anything is possible if you work hard at it.”

Aracely and Alfredo’s business has even created new opportunities for other entrepreneurs, with her brother opening a second location of their party supply store in Las Vegas. She says that it’s been such a success that he opened a second location in the same city.

But fast-forward to today, and Aracely and Alfredo are at a crossroads. Unfortunately for them, cancellations of birthday parties, Mother’s Day celebrations and graduations took a drastic toll on her business.

And for Aracely and Alfredo, they've felt the impacts threefold.

They closed their shop for two months after the initial quarantine order, which set them back financially. In mid May, they reopened her business for a few days only to close her doors once again when a fire unexpectedly broke out near her shop. Despite pleading with officers to let her pick up a large order from her store, they denied her entry. She was told it would take at least three weeks for the area to open again, a calamity that set them back even further.

Once Aracely was able to reopen for a second time, she faced yet another ordeal. In response to protests sparked by the murder of George Floyd and other violence against Black Americans, many cities, including Los Angeles closed businesses yet again. This included La Fiesta Party Supplies & Gifts, which had just reopened after the fire. Aracely explains, “We stand with our comrades of all backgrounds and feel their pain. But now we're facing another hurdle, and I'm not sure how we will make it.”

While Aracely received a Paycheck Protection Program loan and an Economic Injury Disaster Loan advance, she is uncertain about how her business will stay afloat. Following the aftermath of quarantine orders, a fire, and civil unrest, the future of their business is hanging by a thread. She explains, “I’m thankful to the SBA and the government for their support thus far because we will be able to stay open, but it’s still not enough. Businesses like mine need more help now than ever.”

Over the last few months Aracely and Alfredo reinvented themselves to overcome these obstacles. Alfredo worked in various jobs for some time to help ends meet, while she decided to work from home while their three kids are doing virtual learning.

She explains, "It's been an adjustment, but at least I'm spending more time with my kids. My husband is back working at the store, and now we're doing everything we can to fulfill the orders we still have and keep our business going."

Small Business Majority is sharing stories like Aracely’s to educate policymakers about what small business owners need in order to survive this crisis. Help us spread the word that policymakers need to do more to support business owners in order for our economy to recover by sharing your story or signing our letter to Congress.