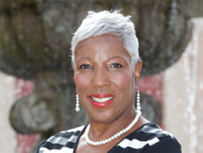 Not long after accepting a voluntary early retirement package from her long time employer, Southern California Edison, Pat Watts found herself yearning to be back at work. So, she turned to entrepreneurship by taking some of the money from her retirement package and starting her own business. Little did she know, her business would end up expanding across the nation and her workforce training program would focus-in on her own community.

Pat has owned FCI Management for 20 years, which now has offices in 3 states and has won countless awards for her work in the small business community. FCI was initially started as a way to give her fellow early retirees a place to continue their careers, but the business has turned into a legacy she looks forward to passing down to her children.

FCI Management is a general analytical contractor that works closely with utility companies and municipalities to instate energy efficiency programs in residential and commercial real estate. This means her team is in the field daily updating appliances, HVAC systems and lighting systems in homes, office buildings and government buildings to make sure they are using energy as efficiently as possible. But, Pat is not only interested in making the utility industry more sustainable, she is also interested in enacting systemic industry change that she’s starting from the bottom up.

She explains, “We really want to help to build a better workforce to deliver the types of services and products people need.”

This all started when FCI won a contract with Southern California Edison that reimbursed the salaries of people participating in a workforce training program. For 16 years, Pat and her team provided on-the-job training for members of the community to learn how to become back-office support, energy assessors and electrical installers. Pat and FCI found great success in the program.

She says, “The main benefit of the program was for the community. I designed the program as a way to introduce the world of energy to communities of color that typically did not have any entrance into the industry, and it was very successful.”

Unfortunately, due to restructuring on the part of the contractor, Pat is unable to continue her workforce training program, but she has been able to work closely with her local workforce development boards (WDB). In fact, she had such a good relationship with the Pacific Gateway WDB that she hired her executive assistant through them and the two frequently appeared in the board's brochures and promotional materials.

Pat really sees the value in workforce training programs and hopes to see more time and resources dedicated to them, both on the part of the utility companies and the state.

Pat has gained excellent employees through these programs, but of her 50 employees, two are particularly special to Pat—her son and daughter. Pat’s son works in Southern California with Pat and her daughter opened and now runs their Atlanta office, and both are poised to take over the business once Pat decides to retire for a second time.

She says, “I’m proud to be able to leave them this business as my legacy. They can do whatever they want with it. It doesn’t have to live in infamy, but I’m happy I can leave them a business that has been successful and has a great reputation. I know whatever direction they take it in will be great.”