The Rise of the Latrine Queen 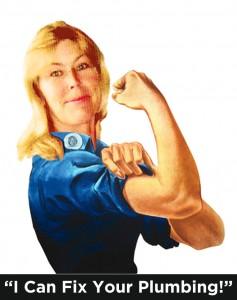 Melanie Lichtfeld, owner of Lichtfeld Plumbing in Madison, WI, is the self-proclaimed Latrine Queen. Although it’s a title she bestowed on herself, it’s one she’s fought long and hard for. Since she began running this family-owned business in 1981, she’s been struggling to gain respect in a decidedly male-dominated field.

Lichtfeld noted that despite her vast competency when it came to plumbing, most men would ignore or refuse to acknowledge her.

In its essence, plumbing is a problem-solving service, and Lichtfeld knew she could overcome customers’ doubts about her competency by plumbing the depths of knowledge at her disposal.

Lichtfeld Plumbing originated in 1895 with her great-great grandfather, Henry Lichtfeld, who began installing indoor plumbing systems in farmhouses. More than 100 years later, Lichtfeld Plumbing has serviced everything from homes to grocery stores and restaurants.

“We are experts in service because service is all we do,” she said. “We help people keep their plumbing systems in good working order. If it wasn’t for Lichtfeld Plumbing, you wouldn’t have any place to go.”

It’s that cheeky confidence and growing up in a long-standing family trade that has helped Lichtfeld become the first woman to run the family business.

“I was raised in the business,” she said, noting that she started answering phones and going on service calls with her father when she was 10. “I enjoyed working with all the different people but I never thought I would be running the company.”

Her early exposure to the business spiraled into a growing interest for the profession. In particular, there were two areas of stalled social perceptions about plumbing that Lichtfeld set out to unclog.

“In Roman days, the plumber held a high ranking position in the government,” she said . “One of my goals was to get more women respected in the trades and to make the plumbing profession an honorable career choice.”

Heading a successful business has done just that for her. And now that she’s all but proven that a woman can seamlessly thrive in an almost exclusive boy’s club, she has her sights set on environmental matters.

“We love the pure water here in the Madison area and take every opportunity to educate our clients and protect their water supply,” she said.

Lichtfeld’s own efforts to be more environmentally-conscious include using copper instead of plastic and planning to expand the sewer cleaning division of the company. “Using less water is a great thing, but we need to help maintain our sewer lines. This means being vigilant of what we put down them,” she said.

If the success of Lichtfeld’s business is any indication, now’s the right time for a queen to rule over the porcelain throne.