Colorado small business feeds the soul and the brain 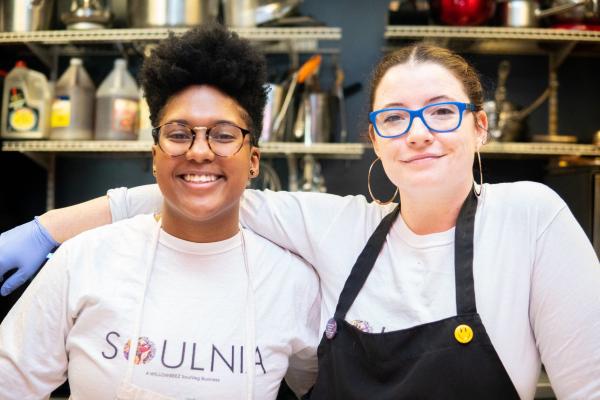 Denver student Kamiya Willoughby is challenging preconceived notions about a popular type of food that is often construed as unhealthy and unsophisticated.

“Soul food is a legitimate cuisine, but most people see it as a snack or junk food that you can only eat every once in a while.” Kamiya said.

“It is such a classic American cuisine that deserves a spotlight and deserves a step away from the stereotypes,” added Tess Hurlbert, Kamiya’s fiancée and business partner.

Kamiya’s vegetarian soul food company, SoulNia, is mainly about carrying on her family’s legacy. She is endlessly inspired by her grandmother’s cooking and her father’s own restaurant venture in Ohio. Kamiya and her father share a dream of educating their community about the history and culture behind soul food, but she wanted to do it by the book, so she decided to study business and entrepreneurship. In order to pay for her education, she joined the military first. During her service, while stationed in Fairfield, Calif., Kamiya met Tess.

After meeting and falling in love with Kamiya, Tess immediately wanted to help get SoulNia off the ground, but Kamiya hesitated because she feared Tess would be putting her own dreams on hold. That was until the two moved to Denver so Kamiya could go to school.

“I realized, she’s my family and it’s a family business, and this is something that I want her to be a part of,” Kamiya said.

Until November 2018, SoulNia was just a dream–one which Kamiya and Tess talked about endlessly. But thanks to a winning business plan, SoulNia was awarded a $1,500 grant though an entrepreneurship program by CO.STARTERS, a national network of small business support centers.

Kamiya and Tess used the prize money from CO.STARTERS to get the necessary licenses and supplies, and now they’re catering special events and private dinners in the evenings and on weekends, while Tess works full time and Kamiya remains a full-time student.

Although Kamiya is the face of the company and brings years’ worth of family recipes and traditions to the kitchen, Tess also comes from a food-passionate family and has a knack for creating new recipes. Together they blend old and new to create a unique dining experience for their customers with recipes like zucchini fritters, Caribbean curried cauliflower and Aunty T’s apple pie.

SoulNia is not, however, just about good food or healthy eating. It is also about education. Soul food has a rich history in America and particularly within the African-American community, but Kamiya and Tess fear that it has been pigeonholed as unhealthy when in reality the origins of soul food are based in leafy greens, root vegetables and legumes. While serving their food, they make sure to open up a dialogue about the cuisine with their clients.

“People have this conception of soul food, but in reality, we are increasing your nutrient profile and increasing the diversity of colors and produce on your plate and without losing an ounce of flavor,” Tess said.

Although their business is thriving, the couple does not anticipate opening a brick and mortar anytime soon. They never want to lose the educational portion of their business and are still figuring out how they would keep that up if they opened a full-time restaurant. In the meantime, they hope SoulNia will become a well-known spot for the community to gather, though they may have already reached that goal. Recently, a friend of Kamiya and Tess was riding in a Lyft and her driver knew about SoulNia and raved about the food.

“It was such an emotional moment because I don’t always feel like we’re doing everything right and to hear that feedback and to know people in the community are talking about our food is so empowering,” Kamiya said.