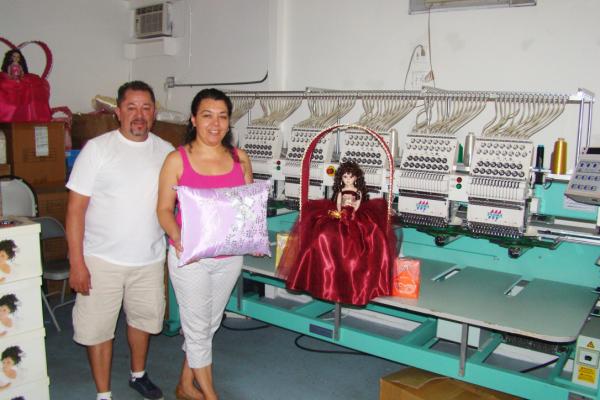 Alfredo Zendejas co-owns Accesorios Zendejas along with his wife, Leticia Sanchez, in Los Angeles, California. A true mom-and-pop enterprise, Alfredo and Leticia work together to design, create and deliver custom decorative pieces for quinceñeras, baptisms, weddings and other special occasions.

Accesorios Zendejas is not Alfredo’s first business venture: he co-owned a business in downtown L.A. for many years, but he and his partner were forced to sell after financial setbacks caused by the 2008 recession. But it didn’t take long for Alfredo to bounce back and return to his entrepreneurial ambitions, as Accesorios Zendejas opened the following year.

Alfredo and Leticia’s business has expanded significantly over the past eight years. Now, in addition to crafting decorative pieces, Alfredo personally delivers their products along the California coast to his customers, who reside in predominantly Latino communities.

Recently, Alfredo faced delays from a vendor who provides the custom stitching for his products, which began to hurt his business. As a result, Alfredo started to look for a piece of equipment to do the stitch work himself and realized it would take some financing. But as mostly monolingual Spanish speakers, Alfredo and Leticia struggled to find the right resources to help them accommodate the growing popularity of their business.

Alfredo exhausted several options to find an affordable loan, but was ultimately unsuccessful, due in part to his difficulty accessing resources in Spanish. Finally, after attending one of Small Business Majority’s access to capital events and speaking at length with our Southern California Outreach Manager/National Hispanic Outreach Manager, Xiomara Peña, Alfredo was able to connect with a bilingual loan officer at Opportunity Fund, a community development financial institution that helps business owners who may not qualify for a traditional bank loan. Soon after, his loan of $26,000 was approved for the purchase of his stitching equipment, which will lower costs and help increase sales. After so many setbacks and struggles identifying the right resources, Alfredo and Leticia were overjoyed that they were able to acquire the affordable capital they needed.

Many small business owners like Alfredo face funding hurdles, such as lack of resources and information. Through our free access to capital events and our online resource portal, we’re working to help entrepreneurs in underserved communities find the information they need to successfully finance their small businesses.

This work is supported by the Sam's Club Giving Program.