Opinion Poll: Small Business Views on Taxes and the Role of Government

Small businesses have become a key weapon in politicians’ arsenals when arguing for practically any policy that has an economic impact. Policies associated with the current tax debate are no exception. Countless rounds of legislative battles have been and will continue to be fought over whether small businesses will be hurt if tax breaks for high income earners are allowed to expire at the end of 2012. Contrary to popular belief, nationwide scientific opinion polling conducted earlier this month found that the majority of small business owners—more of whom identify as Republican than Democrat (47%-35%)—believe that raising taxes on the wealthiest 2% is the right thing to do in light of our budget crisis. What’s more, 40% strongly believe this.

Please indicate whether you favor or oppose increasing tax rates on household income UNDER $250,000

Some claim a large fraction of small businesses would be sensitive to high income tax cuts expiring because they file as individuals; the majority do file as individuals yet only a tiny fraction are in the top tax brackets: 54% of small business owners have their business income passed through to their personal taxes, yet only 5% have total household income exceeding $250,000 (similar to commonly-accepted data showing 3% in this category).

While the majority of small employers’ business income is passed through to their individual income, only 5% report earning more than $250,000 a year

Which of these categories best describes your family's personal income-including any pass through income from your business- in 2011? 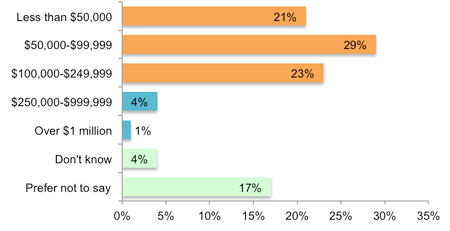 Please indicate which of these statements comes closer to your point of view, even if neither one is exactly right.

Full Report: Small Business Views on Taxes and the Role of Government