No Pedals, No Problem 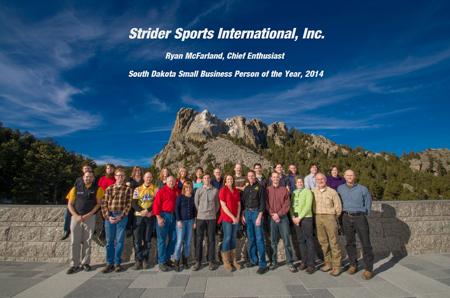 The old adage ‘it’s as easy as riding a bike’ takes on a new meaning thanks to Strider Sports.

Based in Rapid City, South Dakota, Strider Sports is revolutionizing the way children ride bikes by stripping the bike down to its core. In this case, no pedals required.

Ryan McFarland, owner of Strider Sports and inventor of the Strider Rider, got the  idea for such a contraption from watching his two-year-old son struggle with those pesky pedals.

“I went down the traditional path of a tricycle and a training-wheel bicycle but found them to be too heavy and cumbersome for my son,” McFarland said, recalling his efforts to teach his young son how to ride.

“To overcome the problem, I fabricated a super light weight, really small and simple bike with no pedals. He took to it immediately and was soon riding like a pro and far exceeding my expectations of his abilities.”

At just two-years-old, McFarland’s son was mastering the two-wheeled bike. McFarland found that the best way to fit a bike to a child was to eliminate the pedals, chains and cranks that weighed down and drew focus away from balancing and riding, and to just allow a kid to propel the bike with their feet while straddling the bike.

“This simple method of propelling the bike allows the child to focus all of their attention on balancing and steering the bike,” he said. “Having both feet on the ground also serves the other critical function of giving the child confidence in their control of the bike and eliminates fear of falling over.”

With McFarland’s son learning and having fun on a bicycle at such a young age, McFarland noted that other parents were taking notice and began asking him to build similar bikes for their kids. This marked the beginning for Strider Sports.

“Strider bikes are a paradigm shift for most people. People currently don’t believe their children are capable of riding a two-wheeled bike at such a young age. Once they understand the concept and see other children riding the bikes, it makes perfect sense to them,” he said.

Three lines of bikes for separate age groups helps Strider Sports teach and advance the abilities of kids as young as 18-months-old, while passing along a love of cycling at an early age.

And with more than 10 million kids in the United States nestled in the Strider Rider age range, Strider Sports isn’t hitting the brakes anytime soon.

“Our big accomplishment will be when there are more kids riding bikes than watching TV on a nice summer day. Our ultimate goal is to see the antiquated tricycle and training-wheel bikes go by the wayside.”