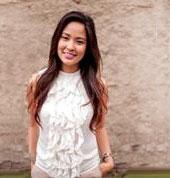 From humble beginnings to an out of this world small business, Jay-Mee Del Rosario clawed her way to the American Dream. As the CEO of International Metal Source, a minority and women owned small business that distributes raw metals to the space, aerospace and defense industries, Del Rosario’s launch to the top was one of extreme hardship.

Born in the Philippines, she immigrated to the United States when she was just 9 years old. Due to her immigration status, she faced obstacles in obtaining jobs and a higher education.

“After graduating high school, I worked numerous jobs simultaneously because I could not attend college due to the fact I was not an American citizen,” she said.

Despite those roadblocks, she managed to start International Metal Source on her own and without a college degree. However, pushing the business forward became yet another problem.

“My business could not grow, unable to bid for government contracts since I was not an American citizen. I felt this was unfair since my payroll included American citizens, not to mention I was paying full federal taxes.”

Many other small business owners like Del Rosario agree that this is one of the aspects of our nation’s current immigration system that needs fixing. According to a scientific opinion poll conducted by Small Business Majority, a vast three-quarters agree we would be better off letting undocumented workers become legal taxpayers so they can pay their fair share and work toward receiving citizenship.

The path toward citizenship for immigrants is a rocky road that nearly derailed Del Rosario.

“The process to become a citizen was not easy. After inconveniencing my family, friends and customers to write referral letters to the immigration office on my behalf – not to mention the exorbitant financial costs attached with this dream – I finally received approval to become an American citizen two years later.”

That winding, laborious process Del Rosario experienced first-hand is why she supports comprehensive immigration reform. Not only does she have her personal anecdote on the trials and tribulations of becoming an American citizen, but she can attest to its importance from a small business standpoint.

“Immigration reform is necessary to encourage immigrants to live the American dream. Specifically, this process should be simplified for those immigrants who are entrepreneurs and can provide strength to local and national economies. I am living proof of such a need.”

With a staggering 88% of small business owners supporting bipartisan comprehensive reform to our immigration system, it doesn’t take a rocket scientist to understand that fixing what’s broken could pave the way for more immigrant entrepreneurs to lift off just the way Del Rosario has, only without so much hassle.