Small business owners give new hope to homeless in Milwaukee 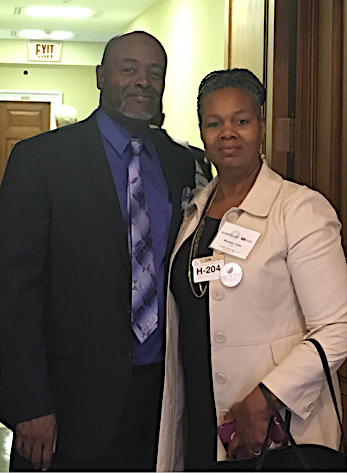 Small business owners Todd and Michelle Trotter are cleaning up Milwaukee’s buildings—and in the process extending a helping hand to its people.

Todd and Michelle, who have now been in the janitorial business for more than 22 years, founded Trotter Industries LLC in 1995 because they needed to earn enough income to support their seven kids. Michelle and Todd both worked in a hospital clinic before striking out on their own; her husband was a lab courier while she was a behavioral-health counselor turned electrocardiogram technician. Unfortunately, their combined salaries were not enough to support a household of nine people, so they decided opening a business would be an opportune way to make extra money. From there, Michelle began combing newspapers for business ideas during slow shifts at the hospital.

“I knew I wanted to start a business to supplement my income and always liked tidying and straightening up, so that was my inspiration, ” said Michelle.

Eventually they settled on janitorial services, so the pair began asking around the hospital for work opportunities and landed a contract to clean the clinic. From there business grew by word-of-mouth, as one job turned into another. Then they landed a massive seven-building contract with the city.

“We had to hire employees at that point,” said Michelle. “Before the city contract the company was family owned, and the kids who were old enough would help out.”

The couple were able to quit their jobs and devote full-time efforts to their business after ten years, and have only continued to grow since—expanding into various spaces like landscaping and even owning and stocking vending machines. Now more than two decades later, Michelle and Todd’s company services 12 or more buildings per month and has the capacity to clean up to 200,000 square feet of space in a single contract.

In addition to providing cleaning services to the buildings of Miluakee, Michelle and Todd help its people too. Some years ago, they began to take an interest in the homeless people they encountered while participating in charity work, an activity that is important to the couple. As Michelle began working more closely with local homeless shelters, she encountered a lot of people who wanted to turn their lives around but needed jobs to do so. Michelle wanted to make a difference in their lives, so she and her husband started the Port of Missions Outreach Ministries, a nonprofit that helps those in need through counseling, job training and basic computer skills.

“We like to mentor and bring some of the homeless people we encounter on board with our company,” said Michelle. “We give them guidance, help them get on their feet, give them work and even go as far as to provide food and clothing.”

Trotter Industries is a company that truly values its employees and giving back to a city that has given so much to them. Michelle’s future goals are to provide more jobs to members of the community and expand their team to more than 50 people.

“My husband always says the strength of any company is its team,” said Michelle. “You are there to push and encourage them, that is what you have to do as a leader.”