Small business owner has a bright idea to recharge the workweek 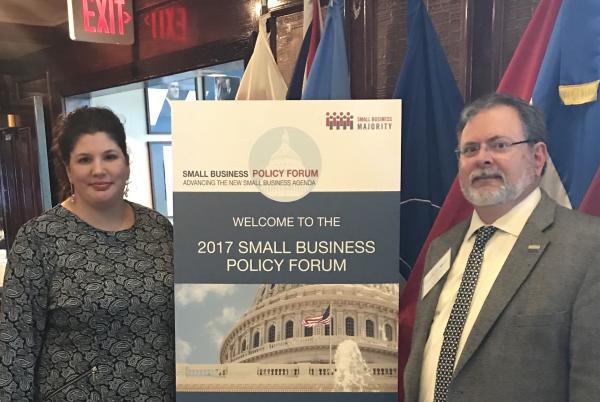 When Chris Petrella found himself in the dark, he had a bright idea.

While camping with his son in 2012 he realized he didn’t have a way to power his electronics. After that trip, Petrella went to a camping supplies store and inquired about such a device.

“I sketched it out for him [the store clerk]” and he told me it didn’t exist. I did a Google search, and it wasn’t found,” Petrella said. “I thought to myself this is so bizarre because I can picture this thing clearly in my mind.”

Realizing there was no supply of this type of portable solar power device, Petrella had a couple of his engineering friends build prototypes based on his design and began using the devices for personal needs. As people began to take interest in the device and kept asking if they could buy it, he “finally gave in” in 2014.

“I guess I’ll build a company around this,” he thought.

Petrella now owns Unlimited Power Ltd in Fletcher, N.C., where he manufactures the BakUpBox, a line of portable solar storage designed to run small electronics such as a TV or heater. The boxes are made in America and Petrella often looks to hire veterans for their production, which is especially important to Petrella since he is a disabled U.S. Army veteran.

Petrella’s business has grown significantly since its origin just a few short years ago, and he now employs 67 people. As the company expanded, he had another big idea: implementing a 26-hour work week. He started to consider the possibility of shortening the work week when he realized that his employees were not using their whole day to work, and that productivity could be greatly improved.

Thus the 26-hour work week was born. Petrella began implementing this program two years ago and was able to do so by splitting his employees up into two teams. Team One takes Wednesdays off, and Team Two takes Fridays off. In addition, employees start an hour after and leave an hour before rush hour. Employees initially pushed back fearing that either benefits or their pay would be cut; however, Petrella explained to his employees that they had nothing to worry about—the only difference was they would work fewer hours but for the same pay and benefits if they were working a standard 35 or 40 hour work week.

The new work schedules have allowed his employees to spend much more time with their families. In addition, the work week has helped many to cut down costs on things like daycare and transportation. Less time in the office has encouraged Petrella’s employees to get as much as they can done in a shorter weekly requirement, motivating them to accomplish their goals so they can enjoy their free time.

"I want to make sure folks know I think their personal time is valuable,” said Petrella.

Since Petrella implemented a shorter work schedule, he has seen his business’s productivity increase by 30 percent, reaching an output level similar to that of an automated assembly line.

“It dawned on me that people were just finding ways to fill the 40 hours,” Petrella said. “By reducing the amount of time people spend at the office, we get a good six hours of work out of everyone every day. The employees are less stressed, they’re more relaxed, and you can’t complain when you have time to balance that work-lifestyle relationship.”

Petrella’s willingness to challenge an institution like the 40-hour work week paid off in a big way, with his company seeing continuous growth and happier employees. His story shows that regardless of the industry, thinking outside the BakUpBox can pay off.