Predatory lending cripples business half a lifetime in the making 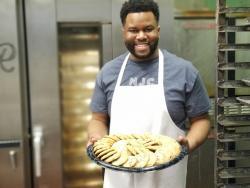 While many 13-year-olds dream of becoming firefighters or football players, 13-year-old Johnathon Bush not only dreamed of being an entrepreneur but was already becoming one. While growing up in Toledo, Ohio, he realized the only way he could make money at a young age was through entrepreneurship, so he started baking cookies and selling them to friends and family. But, his bake sales evolved into something bigger than his middle school self could have expected.

Johnathon has been growing and developing Not Just Cookies Bakery since childhood. After seven years of testing recipes and building a loyal customer base in his hometown, he decided he was finally ready to invest full time in his business and at 20 years old Johnathon moved to Chicago to establish his bakery. Over the last six years, he has opened a brick and mortar, operated out of a kiosk as the Daley Center Pedway and signed wholesale contracts with grocery stores and cafeterias throughout Chicago.

As you can imagine, Johnathon has an intense passion for his all-natural cookies and his business, but his entrepreneurial journey has not always been an easy one.

A few years after moving to Chicago, Johnathon felt like he was at a standstill. He needed more money if he was going to grow and reinvest in his business. Being strapped for cash was a scary feeling, and Johnathon sought out a quick remedy: A merchant cash advance (MCA). An MCA is essentially a loan taken out on your credit card sales that typically requires a daily minimum repayment, regardless of your sales. To a struggling entrepreneur who’s unable to gain credit through traditional lending, this can be the fastest way to access capital. But an MCA can also be a risky undertaking. Unfortunately, there are some bad actors in the small business lending space that do not fully disclose the true cost of the financing in their offers and contracts and mask extremely high interest rates, taking advantage of unsuspecting business owners who are desperate for capital.

Over six months, Johnathon took out two different MCAs of $20,000 each. Johnathon received the cash immediately, but he had to start paying it back almost as quickly. Each month the amount due to the credit card company was automatically taken out of his account, no questions asked. But, Johnathon wasn’t actually turning enough of a profit to pay the loans back as quickly as required. By the end of the year, Johnathon was completely broke.

"It was the worst decision I have ever made. And there was no reason for it. Before getting these loans, I was doing well. I just wanted to reinvest in my business. But now, I am not growing. I'm not even maintaining the growth that I had. The burden it caused was greater than I could have imagined," Johnathon explained.

Johnathon was afraid he was going to lose the business he spent half his life growing, but before closing up shop for good, he reached out to his business’s original fans—his friends and family—to explain what happened and was overwhelmed by the support he received.

"They are the only reason I am still in business," Johnathon reveals.

Unfortunately, Johnathon’s experience with MCAs is not unique, and many small business owners who take out MCAs are not able to recover because the true cost of their financing is not fully disclosed at the time the business owner signs the contract.

“There are safer ways to access capital that are worth the wait to avoid MCAs,” Johnathon advises his fellow business owners. "MCAs cripple entrepreneurship. It certainly crippled me, and I am still recovering over a year later. There should be laws in place and transparency to stop these sharks."

Small Business Majority is working alongside a network of non-profit and for-profit lenders, investors, and small business advocates as part of the Responsible Business Lending Coalition to combat the rise the irresponsible practices in small business lending. If you have a story you'd like to share with us as we educate policymakers about this issue, please contact us.