This is a guest post from Covered California for Small Business.

Scheduling open enrollment for health insurance at the end of the year is akin to driving on the Bay Bridge during rush hour. The journey could be long, slow and more than a little frustrating.

Unfortunately, November and December are exactly the times that many small businesses schedule open enrollment for their employees. Chris Patton, vice president of sales at Covered California for Small Business says open enrollment at the end of the year is a tradition that like many other end-of-year activities can be stressful. 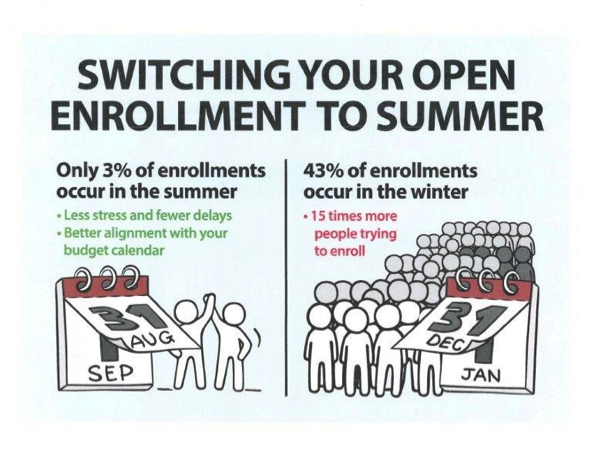 “Every segment of the health insurance market is happening at the end of the year,” Patton said. It can be an incredible stress on health insurance companies because of the heavy workload in a compressed period of time. That creates delays, and it can result in poorer service.”

Moving open enrollment to an earlier spot on the calendar would be especially advantageous to companies with 50 or more employees that delayed offering workers health plans that were compliant with the Affordable Care Act.

Moving open enrollment to, say, the summer might be more financially synergistic with July 1 to June 30 fiscal year on which many businesses operate, said Brad Davis, an agent with Wraith, Scarlett & Randolph in Woodland, CA.

“When open enrollment is on a different timetable, it can foul up your budget and cash flow projections for the fiscal year,” Davis said.

For those in agribusiness and other seasonal professions, having open enrollment at the end of the year may also be incompatible with health insurance needs, Davis said. One example is where farmers start hiring in mid-February for spring and summer seasons, but then must throttle back significantly by October. Having open enrollment in December when there is no work, or workers, doesn’t make sense.

More businesses than ever are now able to enroll in Covered California for Small Business.  Starting this year, businesses with up to 100 employees can apply for health insurance coverage that’s affordable, top quality, and brand-name from six health and seven dental carriers.

Additionally, there are four tiers of plans – Bronze, Silver, Gold and Platinum - with dozens of plan options.

Employers decide how much of a contribution they will make toward employee coverage, then choose plans from a metal tier level that fits their needs.

In addition to the four metal tiers discussed earlier, employers can also offer a base metal tier with the option for the employee to buy down or buy up to a dual metal tier.

This allows employers to offer two tiers of coverage to their employees rather than just one.

Tiers must be adjacent to each other, for instance, employers can offer both Silver and Bronze plans but not Gold and Bronze.

The employer selects a reference plan from a metal tier and commits to contributing 50 percent of the premium amount towards the employee’s premium.

This dollar amount stays consistent regardless of which plan the employee chooses.

“More choice, more value and more control,” Patton said. “That’s what we’re striving to provide businesses and their employees who shop for health insurance through Covered California for Small Business.”