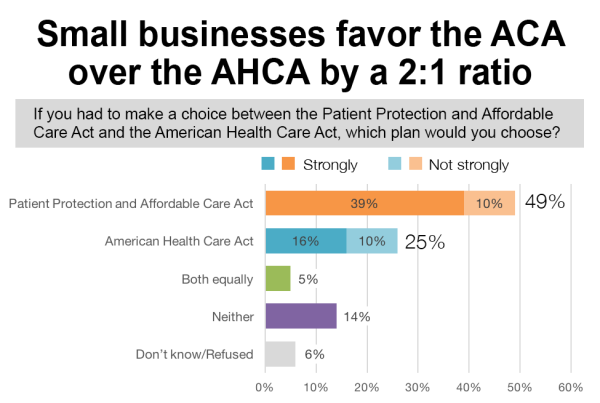 Some lawmakers may be intent on repealing and replacing the Patient Protection & Affordable Care Act (ACA), but our new scientific opinion polling released today shows small business owners support the ACA over the American Health Care Act (AHCA), the Republican plan to replace the law currently being considered in Congress.

Here are 5 key takeaways from our poll:

3. Small businesses oppose the American Health Care Act after they learn more about the plan. When asked about the replacement plan, small business support is initially split: 40% of respondents support the legislation, with 39% opposing it. However, once respondents review specific provisions of the AHCA, opposition grows to 51%.

4. Survey respondents reviewed numerous provisions of the replacement plan and results show small businesses oppose key components of the legislation. A majority disapprove of a provision that would remove the individual mandate and allow insurers to impose a 30% surcharge on individuals who allow a gap to develop between their existing health plan and a new health plan. And half (50%) disapprove of replacing existing healthcare tax credits based on age, income and geography with tax credits based solely on a person’s age and not their income or where they live.

5. The only specifics of the plan that small businesses do support are provisions already available under the ACA. This includes provisions that prevent insurance companies for charging more for pre-existing conditions and that allow young adults to stay on their parents’ plans until age 26.

You can read the full poll here to check out more of our findings. As these results show, small businesses believe the ACA is working and they have real concerns about the AHCA. Without many of the ACA’s provisions, small businesses will struggle to access health coverage and millions of Americans will be left uninsured. This is why we’re urging Congress to reconsider their push to repeal and replace the ACA.