For the second time since the summer of 2011, Congress is debating whether or not to raise the federal debt ceiling—the legal limit on how much the federal government can borrow. While addressing our debt is an important issue that carries weight for small business and the economy, some politicians have been misusing the debt ceiling as a mechanism for furthering their own partisan agendas. Short-term solutions lead to uncertainty for small businesses and our job creators want our leaders to put this issue to rest. National opinion polling released today reveals the majority of small business owners desire a long-term solution to this issue rather than a short-term one, and believe we cannot continue allowing politicians to hold the economy hostage to their particular spending priorities. Given the partisan nature of this debate, it’s important to note the sample was majority Republican, with 52% of respondents identifying as Republican, 34% identifying as Democrats and 11% identifying as independent.

Our opinion polling has shown that strengthening the economy has been small business owners’ top priority over the past couple years, and they want it to be lawmakers’, as well. This data reveals their feelings haven’t changed. When it comes to the debt ceiling, small businesses want a long-term solution that gives them the certainty they need to make similarily long-term decisions about their business. Small business owners believe our current process for raising the debt ceiling not only threatens the U.S. credit rating, but allows politicians to hold the economy hostage to their own spending priorities. And while small business owners recognize the need for a solution to our debt ceiling issue, they feel the right solution—while mindful of our deficit—must be cognizant of the fact that our economy isn’t out of the woods yet. Any plan to control our debt must provide long-term support for job creation and the economy, not hold them hostage.

A 3:2 majority of entrepreneurs wants a solution to our recurring debt ceiling issue that is long-term rather than short-term, so the U.S. can pay its bills without the debt ceiling coming up for political votes over and over again: A 55% majority agrees that this ongoing issue allows politicians to hold the economy hostage to their own spending priorities and threatens the U.S credit rating. What’s more, 35% strongly agree with this. Barely a third (36%) agree with an opposing statement that the debt ceiling is an important check on the federal deficit and helps prevent unrestrained government spending that hurts our economy more than anything.

The majority of small business owners believe the most important job for Congress and the president in 2013 is a plan to create jobs, compared to a plan to reduce the deficit: While small business owners recognize our budget crisis needs a solution, they don’t want the solution to interfere with job creation opportunities: a 53% majority believes a plan to create more jobs should be the top priority for Congress and the president in 2013, and 47% strongly feel this way. A minority (42%) feel a plan to reduce the deficit is most important.

Congress will soon decide whether or not to raise the federal debt ceiling, which is the legal limit on how much the federal government can borrow to pay for the budget. This is the second time since the summer of 2011 that Congress will deal with this issue. Below is a pair of statements about the process of raising the debt ceiling. Of the two, please indicate which statement is closer to your own views. 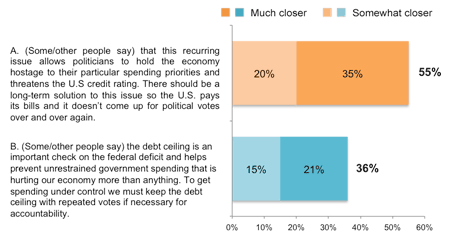